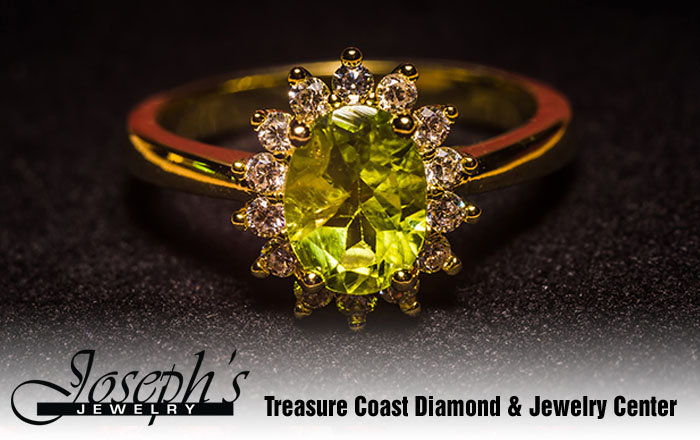 Peridot has been a vastly overlooked stone for many years. Due to the fact that they are readily available and relatively cheap. Peridot is used as the birthstone for August and is commonly found in fashion jewelry. Peridot in ancient cultures was associated with the sun, and it was supposed to keep the darkness away from those who wear it. Unlike any other stone except diamond, peridot is formed in the molten mantle of the earth and not in the crust!

“Associated with the sun, Peridot has been prized since the earliest civilizations for its protective powers to drive away the forces of darkness. Set in gold and worn around the neck or bound to the left arm, it was used as a charm against sorcery and magic, evil spirits, night terrors, and madness. It cured cowardice, calmed anger, as well as brightening the wit. Peridot is still celebrated for those virtues, protecting the aura, purifying the physical and subtle bodies, and alleviating emotional burdens, guilt and obsessions. It is particularly beneficial for overcoming fear, depression and other psychological disturbances, as well as releasing jealousies, resentment and spite in order to move forward. Peridot promotes responsibility and forgiveness, instilling confidence in one’s own abilities and reestablishing a sense of self-worth. A powerful generator of the frequency of increase, this lovely talisman may be utilized to manifest abundance in all areas of one’s life: wealth, health, happiness and love.”