5 Things Jewelry Lovers Want to Know About the October Birthstone

Opal is a unique and popular gemstone which lends itself beautifully to jewelry, amongst many other things. Have you ever seen the way an opal’s many colors shine? Read on, and we’ll discuss five weird and cool facts about the popular October birthstone, the opal!

Is October Birthstone Opal or Tourmaline?

Those born in October enjoy two spectacular birthstones to commemorate their birthdays, opal and pink tourmaline. Both October’s birthstone is multi-colored, as both opal and tourmaline usually radiate a spectrum of colors. The array of colors helps October birthstone jewelry stand out. You can customize any piece to your style and personality. These unique gemstones offer a wide range of jewelry options, from pendants to earrings.

Is October Birthstone Opal or Pink?

October’s birthstones are pink tourmaline and opal. Tourmaline, the primary birthstone, is rare because it is one of the few gems that can be found in almost every color. Some pink tourmalines have clarity as transparent as diamonds! Opals, on the other hand, are in a class by themselves. Opal is so unique its patterns have their own descriptive vocabulary. More than any other gem, each opal is distinctly individual. Opals are also the most delicate gemstones commonly worn and require special care.

Why Does October have two Birthstones?

In an effort to standardize the birthstones, the National Association of Jewelers decided to create a list of accepted birthstones for each month in 1952. That last has since been tweaked over the years to reflect changes in styles and availability of stones on the market. In October’s case, the opal was seen by many to be too feminine in appearance and there were questions about its durability. So the association decided to add tourmaline to the mix. More recently, it was decided that the October birthstones would be opal and pink tourmaline, specifically.

What is the October Birthstone Meaning?

Opal, the traditional October birthstone, is believed to have originated in India (the source of the first opals brought to the Western world), where in Sanskrit it was called upala, a “precious stone.” .” In ancient Rome, this became opalus. Most opals are valued for their shifting colors in rainbow hues – a phenomenon known as “play-of-color.”

Tourmaline is the newer October birthstone. The name comes from the Sinhalese word toramalli, which means “stone with mixed colors,” because it often has multiple colors in one crystal. Very few gems match tourmaline’s dazzling array of colors. Perhaps this is why ancient mystics believed this October birthstone could inspire artistic expression – it has a color palette for every mood. Among the most popular are the pink and red rubellites, the emerald green “chrome” tourmalines, and the neon green and blue-to-violet “paraíba” tourmalines.

What Color is the October Birthstone?

Opal & Tourmaline have become the staple birthstones of October. Opal and Tourmaline are both some of the most beautiful and untraditional of all gemstones.

Opal’s shifting play of kaleidoscopic colors is unlike any other gem. Fine opal’s beauty is elusive and challenging to capture in words. It has been compared to fireworks, jellyfish, galaxies, lightning and volcanoes.

Traditionally represented as pink, the tourmaline can come in a rainbow of hues, pink (the accepted color to represent October’s birthstone), blue, high-end reds, and greens adorn the showrooms of designer jewelers.

What Are Typical October Birthstone Rings?

Shop October birthstone rings at Joseph’s Jewelry. We have some fantastic rings to offer for this birthday month. Here are just a few;

What Are Typical October Birthstone Necklaces?

Birthstones endure through history. They link us to important parts of society, such as religion or custom. Modern times match these ideas too. Over the years, these special stones have come to reflect current tastes, thoughts, and trends. Join us as we look at the October birthstone, opal, and pink tourmaline, the alternate.

Shop October Birthstone rings and necklaces and other fine jewelry at Joseph’s Jewelry, and learn why October have two options for birthstones: Opal and Tourmaline. The color for October’s birthstone is multi-colored, as both opal and tourmaline radiate a spectrum of colors. Tourmaline is the modern birthstone for October while Opal is the traditional birthstone. Both tourmalines and opals have their enthusiasts, but opals just edge past them in popularity. The array of colors helps October birthstone jewelry stand out in a class by themselves. You can also customize any piece of jewelry to fit your style and personality. These unique gemstones offer a wide variety of jewelry options, from rings to necklaces. Learn more about these two October birthstones and discover the perfect gift at Joseph’s Jewelry for those born in the tenth month. 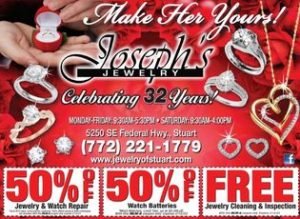