March was named for Mars (the Roman god of War). Wars had ceased for the winter. March marks the beginning of spring and time for returning to war. March has two birthstones; Aquamarine and Bloodstone.

The original birthstone for March was the Bloodstone. In 1952 the Aquamarine became the primary March birthstone. Aquamarine gets its name from two Latin words “aqua,” meaning water, and “mare,” meaning sea, because it looked like seawater. Much of Greek and Roman mythology concerning the Aquamarine carries stories of the sea, mermaids (sirens ), and safety from disaster on the sea.

5 Things Jewelry Lovers Want to Know About the March Birthstone

Most Questions Ask About the Birthstones in March

#1 What are the 2 Birthstones for March?

The two birthstones for the month of March are Aquamarine and Bloodstone. Aquamarine the modern and now official March birthstone. Bloodstone was the traditional birthstone and is considered the alternative gemstone because of its unusual gemstone history and gothic color palette.

#2 What is the Meaning of Aquamarine and Bloodstone?

Bloodstone is believed to bring success, vitality, and good health.

Both gems are believed to protect the wearer’s well-being.

#3 What is the Traditional and the Modern Birthstone For March

#4 What is the March Birthstone Color?

Aquamarine ranges from deep blue to pale green-blue and appears as if it had just been washed up on shore from the depths of the sea. Which is probably why tradition believes the Aquamarine came from deep beneath the sea washed up from the jewel boxes of sirens.

Bloodstone, also known as heliotrope, which means “to turn to the sun,” is dark green with red spots. The story goes that when Christ died on the cross, his blood splashed upon green stones, and the Bloodstone was born.

The best way to identify a real aquamarine stone is by examining its color. In its natural form, Aquamarines are a pale blue color, which is similar to seawater. They may have a slightly green or yellow tint as well. Naturally occurring gems have excellent clarity and transparency.

#6 Who Can Wear Aquamarine Jewelry?

Aquamarine‘s lovely cool tones may be worn by all skin types. Aquamarine has a 7.5 to 8 on the Mohs hardness scale. It is a durable gem allowing for everyday wear. Aquamarine is well suited to be worn with both romantic and business clothing.

#7 What is Pisces birthstone?

#8 What are Typical March Birthstone Earrings? 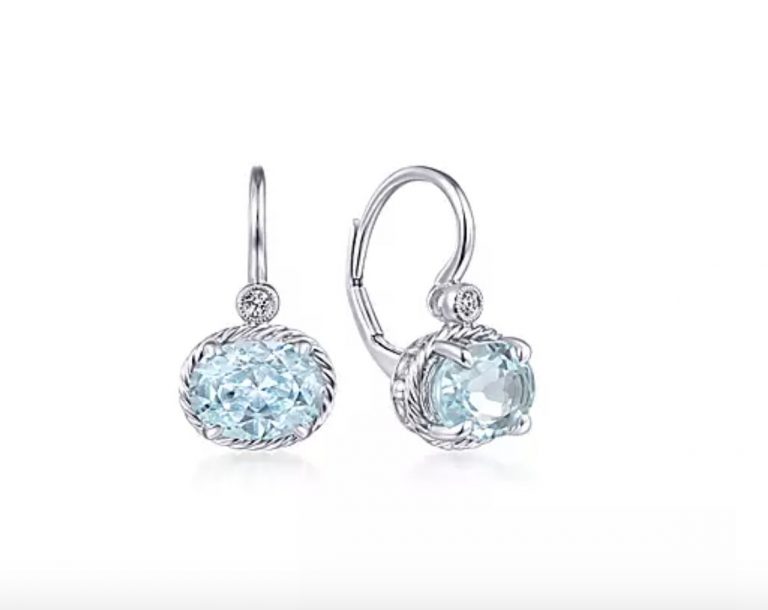 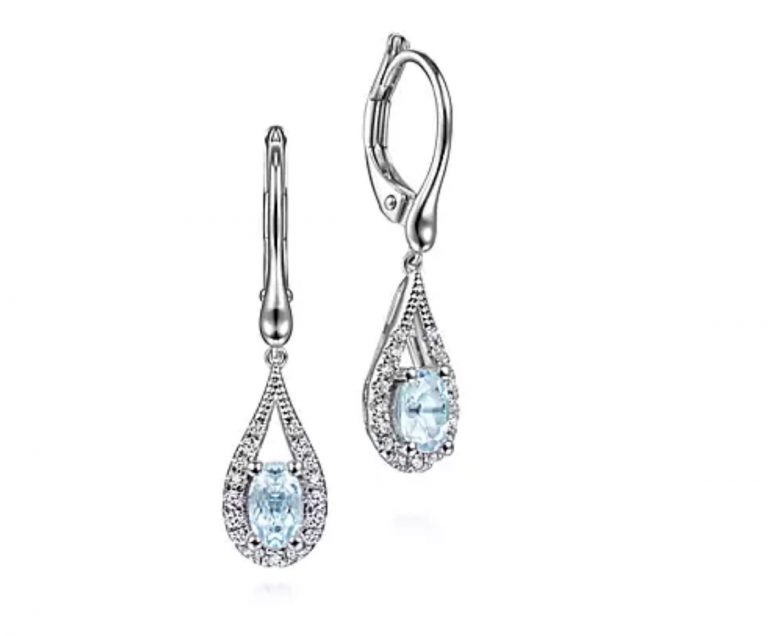 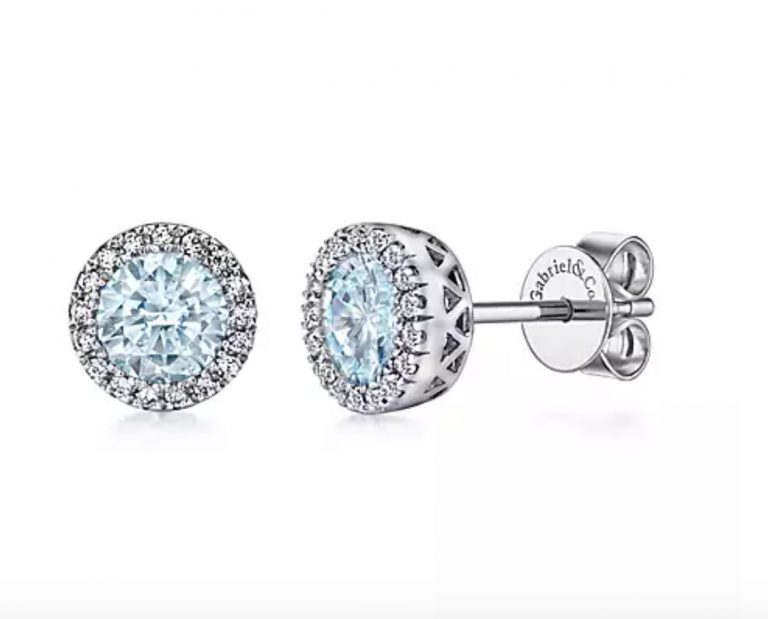 #9 What are Typical March Birthstone Necklaces? 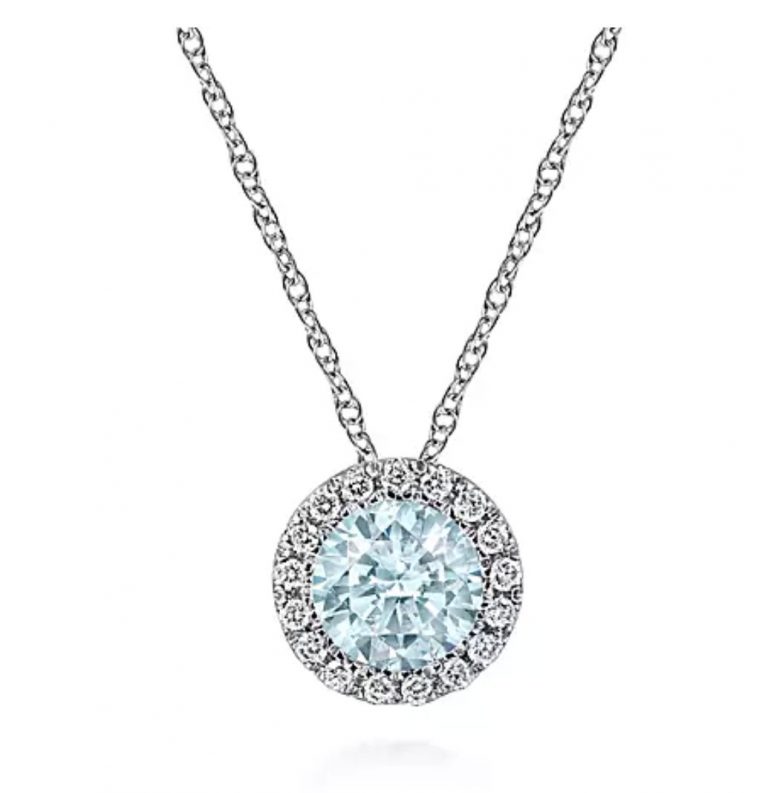 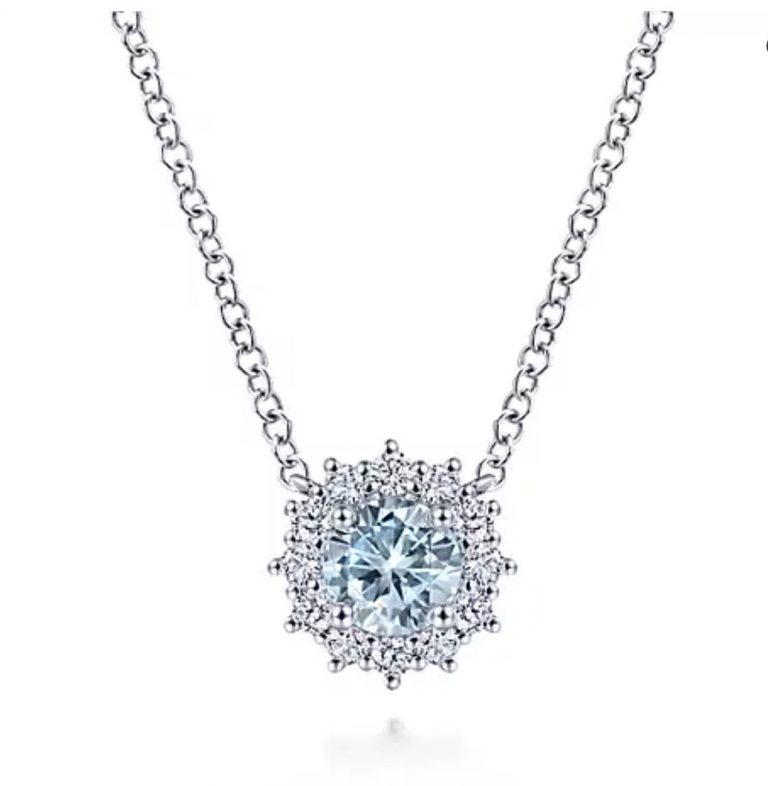 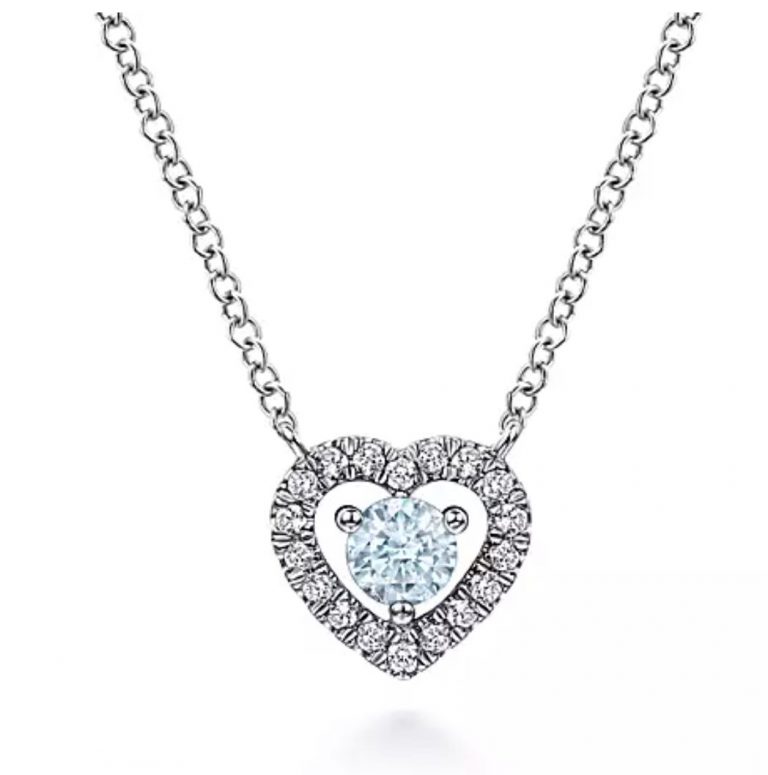 #10 What are Typical March Birthstone Rings? 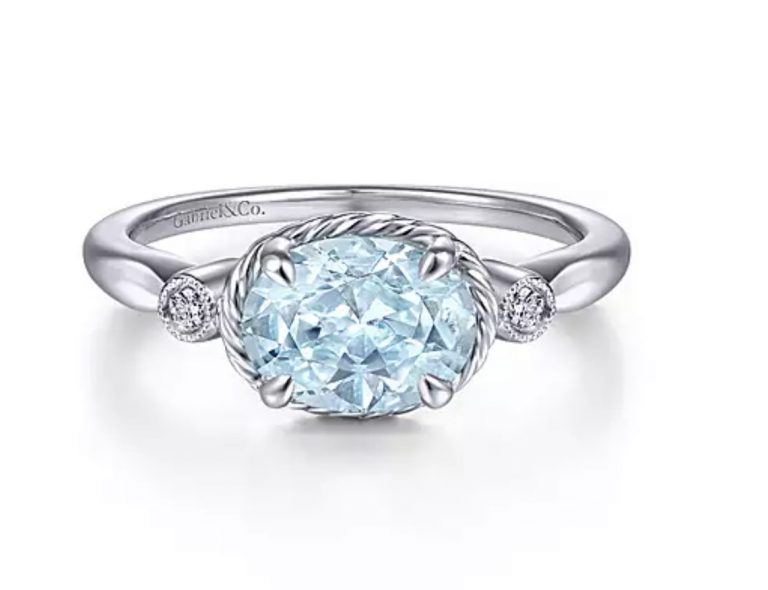 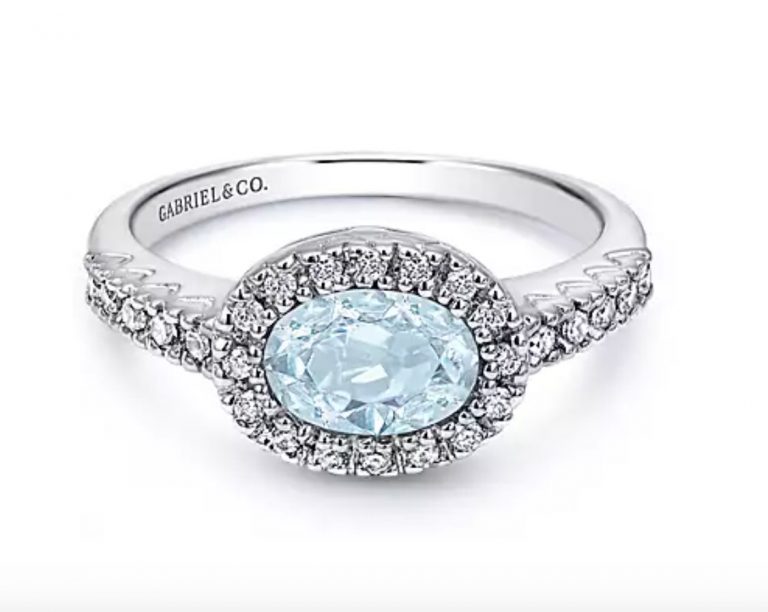 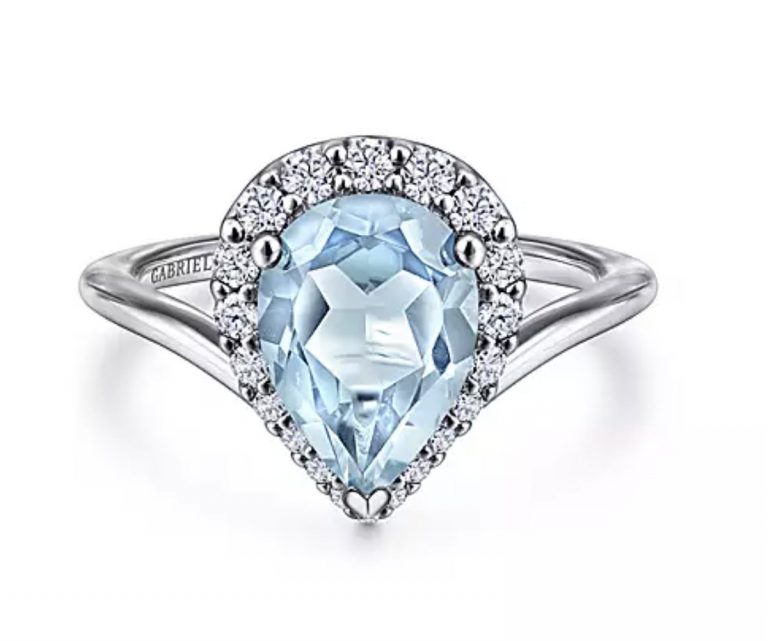 Care and Cleaning of Aquamarine

Historical Stories and Facts Around Aquamarine and Bloodstone

Aquamarine grows as a six-sided crystal. The largest Aquamarine ever found weighed 243 lbs. It was discovered in Brazil in 1910. It was cut into smaller stones producing over 200,000 carats. Aquamarines are mined in Brazil, Nigeria, Madagascar, Zambia, Pakistan, and Mozambique.

Roman fishermen called Aquamarine “water of the sea”. It was believed it would provide protection and luck in catching fish. Romans doctors thought it would help with overeating and bloating. Romans thought Aquamarine was sacred to Neptune, their god of the sea. According to a Roman legend, “When blessed and worn, it joins in love and does great things.”

At one time, it was believed to protect against poisoning. So during a time of much poisoning among the royalty, the stone became extremely popular.

In the 1500’s the royal astrologer and consultant Dr. John Dee used an aquamarine to predict the optimal date for the coronation of Elizabeth 1st.

March celebrates the beginning of Spring. It promises hope and new beginnings. Aquamarine is a lovely way to celebrate love and friendship. Come in to Joseph’s Jewelry and see the beautiful assortment of Aquamarine jewelry available for your delight.

It’s not just Aquamarines name which links it to the sea, but was a popular gemstone amongst sailors. When leaving on long voyages, sailors would take with them an aquamarine stone to protect them from seasickness and any unexpected accidents.

In 1910 the largest aquamarine was discovered in Brazil weighing 244 pounds! Although aquamarine is known to protect sailors, it is also known as “mermaid treasure”, and helps to release anxiety. Aquamarine is believed to relax the senses, make you think clearly, and is often used in meditation. Aquamarine is one of the most beautiful, popular, and versatile gemstones on the market. Aquamarines are also trending as engagement center stones in beautiful setting with rose gold, or white gold settings.

At Joseph’s Jewelry, we carry numerous elegant Aquamarine jewelry pieces catering to every budget, and desired style. We are here to help residents in Stuart, Palm City, Hobe Sound, Jensen Beach, Jupiter and Port St. Lucie to find your perfect jewelry piece, complete a jewelry set, or make a custom jewelry design as unique as you are! We will also repair and restore your jewelry pieces and watches whether or not they were purchased through us. Come in anytime to check out our unique diamond rings, pendants, bracelets, earrings, and Citizen Eco Drive watches in stock for a celebration, last-minute gift, or spontaneous surprise. 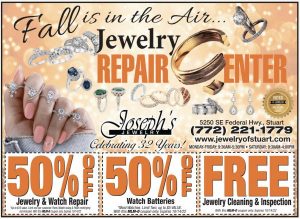